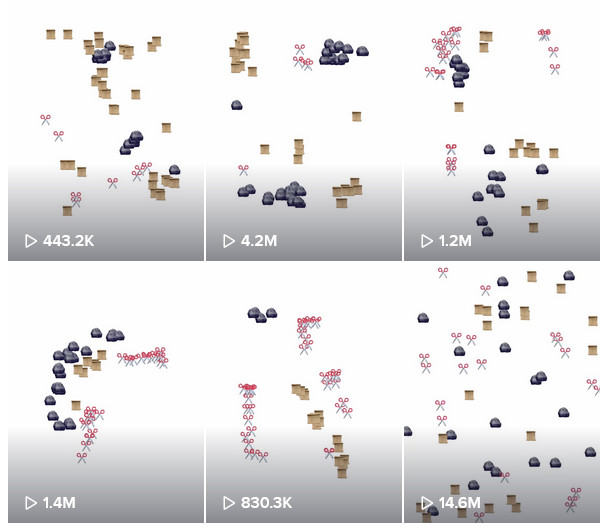 "Living RPS" - A cute little 0-player game I made that got a really sweet community on Tick Tock! Merch and a web player with a soundtrack by my buddy Kauzmeat can be found online HERE!!!!!!


"Big Chungus" - An experimental flash game based off the 2019 internet meme Big Chungus. This proviocative little thing could be accurately be called a horrifying primordial swamp of pop culture. Like an iceberg, the majority of Big Chungus's features are velied behind secret code unlocks in the CD key prompt screen. Hunting down codes and playing the right ways can help you unwravel the meta-narrative behind the game's creator, Guthrey Fargus, and suppitive layer transfer. Big Chungus was released for digital sale online before a physical Deluxe Edition with extra content was released. It did surprisingly well in Italy. Huh.

"Labyrinth of Shadows" - A simple dungeon crawler I made out of love for the aesthetics of old school arcade cabinets like Gauntlet. Post-processed with a VHS plugin to force players to think about the MEDIUM of the game. Immersion rocks, but the feeling of artifice is so so so cool. The music is by the dungeon synth artist Erang. I stuck a bunch of reverb over all the audio so it feels like you're playing it in a big empty room. Neato!

"Peter Fights Bears" - A timed beat 'em up game in which I fight fireball-shooting bears. I developed Peter Fights Bearsto raise money for Techology Seminar, an 80-member Baltimore area creative collective I founded which hosts presentations and discussions on the creative applications of digital technologies. We set up a stand for people to play on in a high school cafateria. We sold some CDRs too!


"Gunner" - A continuation of the aesthetic experiments I began in Labyrinth of Shadows, this time opting for a vector terminal style over the pixel dungeon. Gunner's mechanics are tuned to support the anxious aesthetic: The enemies move in floaty agression and don't get knocked back by player bullets. The random spawning of items and the organically building bullet hell demand total concentration. Scary game! It stresses me out.