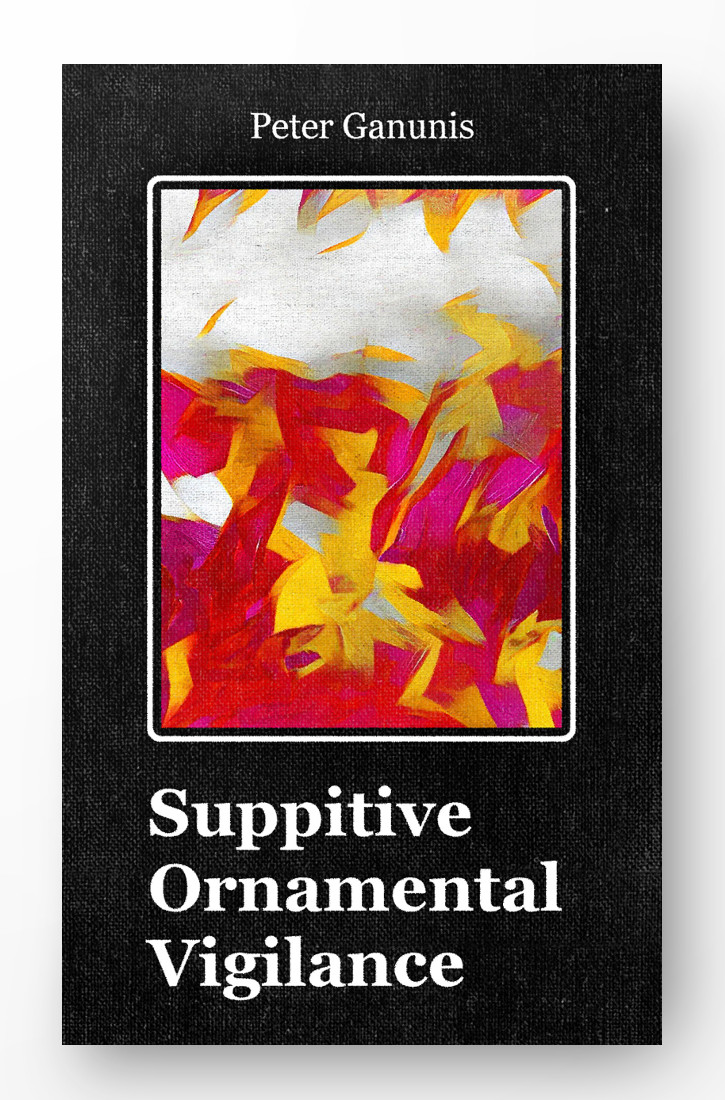 "Sit down, now: The world is ending. It's beautiful."

Suppitive Ornamental Vigilance is an experimental human-AI collaborative novel by Peter Ganunis. The book features a liquid narrative, flowing unconventionally between subjects such as Randy and Kathleen, two lovers; The Boozies, an experimental but critically acclaimed band; Robert Fomol, an accountant in a car wreck; and Q, the developer of a mysterious project called H-I-L-D.

"Let this book stand as a celebration of the digital noise innate to the techniques used in part to create it. Embrace the loss of clarity, the inability to pinpoint the precise meaning within the literary latent space of these pages. Find beauty in the logical flow of nodal erraticism."

We find ourselves on the brink of an artistic revolution, peering into a novel tangential rift of aesthetic expression emerging from the incorporation of artificial intelligence (AI) into the human artistic workflow.

Generative AI is a data synthesis technology. A computer is prompted with data, which it will study and try to replicate. It will identify patterns and apply them to generate new data that it thinks would fit in the set, much like an infant assembling the syllables it hears in its parents' conversations into primitive words as it learns to speak—meaningless jargon stylistically suggestive of meaningful speech.

In this way, AI exists in the creative process as a stylistic tool. A network set loose with the goal of mimicking Monet's style will not immediately be able to redraw Water Lilies. It will generate originally structured paintings that carry the Monet aesthetic, just as a learning infant will utter stylistically interesting linguistic noise before it can clearly articulate the sentences of its parents. The style is consistent, but the substance is new.

There comes a time, though, when the child will eventually learn to speak in full and clearly articulated sentences. Similarly, our synthetic Monet will eventually progress enough in his studies to exactly redraw the works of his flesh-and-blood equal. He will realize that the most efficient method to generate a painting that looks like one by Monet is to precisely forge an existing one.

This is referred to as overtraining—when a machine decides that the best way to generate new data consistent to a set is to exactly copy existing data.

As such, the most useful creative contributions come from a machine that is only partially trained. Artists are looking for the primitive babytalk of creative development: erratic but highly stylized nodal connections. What artistic good would it do to be a well-studied author—if only to write books that have already been written? Understanding is secondary to creation.

David Aylaian, a friend of mine to whom this book is dedicated, used artificial intelligence to generate a cookbook, Deep Dishes. He downloaded thousands upon thousands of recipes and fed them to an AI, which studied them and wrote more recipes.

The first instructions his digital chef wrote were barely compre- -hensible. "~FLAYE VEGETABRES FILLFONS", for instance, calls for "pecunnt verman", "itblen", and "oregayels", among other things. Later on in training, the chef hit its programmatic runner's stride and started concocting recipes that were still bizarre, but with enough internal logic to be somewhat believable: "Coffee Tofu", "Ham Cookie Freezers", "Candy Chocolate Chili", etc. They were abstracted enough to be presentable, but erratic enough to be unique.

The imbalance of these forces, abstraction and erraticism, lead to the downfall of David's chef. As it learned to more accurately recreate its training data, the recipes mimicked those from the real world too closely. They became too familiar. They lost their creative spirit as the chef got better at replicating the subject of its studies.

The creative nature of AI is a promising artistic device. While other digital tools, like image editors or word processors help artists to manipulate work, they don't create anything. Word cannot write a book, nor can Paint draw a picture. AI is alone in its ability to introduce new, original content to a work. In this way, it is promising for use as a flow state technology—an extension of human creativity: How can writer's block exist if an author can immediately generate infinite permutations of the text that might come next?

As an artist, I am fascinated by aestheticism and the tonal qualities of pieces. Style transfer is a powerful tool for its ability to accomplish distinct visual effects that would otherwise not be realistically feasible. Any photograph can be turned into a painting. Style transfer can instantly apply select stylistic elements to a work, encouraging the aesthetic experimentation necessary to develop a new movement of artistic philosophy.

Perhaps the most interesting application of style transfer and other neural techniques is allowing human creators to shift to an editorial role in the workflow.

In traditional, non-AI visual workflows, one of the most primitive techniques is combining images into a composite. Imagine, for instance, three photographs: the shore of a beach, the ocean, and a boat at sea. You want to combine all three to create an image of a boat off the coast. To do this, you could line up and scale each element to put it in the right place with the right size. Then, you could correct the colors so that all three have consistent palettes and the illusion of consistent lighting conditions. You then mask out and erase the unneeded portions of each image, blending where necessary. The portion of water in the image of the beach can be smoothly faded into the water of the ocean photo, as water is fluid—a harsh, distinct change in visual texture would immediately be seen as incongruous. An editor could apply similar logic to determine the masking requisite for the boat: Boats have specifically defined edges, necessitating a more precise cut.

The eye will immediately be drawn towards any oddities in a photorealistic image, encouraging the adoption of an iterative workflow. We are already so familiar with what a boat in the water should look like, small details like a missing shadow or inconsistent shades of water will distract the attention of a viewer. They feel wrong.

In this way, photo editing becomes a flow state process; when something feels off, the editor will intuitively recognize the uncanny and work to assuage the awkward details. The roles of specific tools do not obtrude the editor's concentration on the image itself—the form of the output rather than the means by which it is made. Conscious thought is supplanted by a meditative trance of digital post-production.

Traditionally, the process of assembling a creative work with no pre-existing structure takes a drastically different artistic approach than such composites: Combinatorial design is more specifically iterative than creative designs requisite of many low-level stylistic decisions. Making a painting of a boat at sea, unlike our composite, requires an artist to consider the forms and colors of the objects in a further abstracted setting as they work to create them from scratch, making the painting process more cerebral and less entrancing than the primarily iterative composite workflow.

In combination with manual editing and post-correction, style transfer allows creative visual design to become just as meditative as photorealistic composite work; AI focuses human creativity by working in stylistic collaboration with artists. By introducing original content for a creator to consider the merits of, the iterative elements conducive of flow state in composite work are introduced to the general creative process, empowering artists to make more intuitive stylistic decisions.

Similar to an editing workflow enhanced by style transfer, this book was made in a literary human-machine flow state. The text generation AI, GPT-2, used in part to write this novel works by repeatedly guessing the next word in a passage by relying on its understanding of language from reading scores of literature and web pages. This results in an abstract stream of consciousness, prenatally controlled by a human author—much like when selecting stylistic elements to be referenced for style transfer works.

The AI's guesses are made based upon only the most recent paragraph or so of text, requiring a hidden succinct human summary of previous events to be used as input for generation—This book has been written over and meticulously edited many times to provide the hidden literary structure requisite to inspire interesting generative text.

As of writing, it has now been nine months since the initial release of Suppitive Ornamental Vigilance. The abstract nature of this work makes the reading experience deeply personal, dependent on the meaning you find in connections between different sections of text.

In speaking with readers over the past nine months, I have become intimately familiar with the many different experiences this work can inspire. Through further editing and the expansion and addition of passages, I have worked to make Suppitive Ornamental Vigilance more conducive of these powerful and nuanced literary experiences, while still preserving the original intention and process of the first release. Along with these changes to the book's textual content, I opted for a new cover design that better showcases the texture and form of the accompanying style transfer painting, which I feel reflects the transient lucidity of the written components.

Style transferred images, like every other artistic technique, have their signature artifacts: Repeating textures, broken patterns, and faded grey areas where the style can't be easily applied to the content. Because of these, very rarely are style transfer outputs immediately artistically effective. Human editing is needed not only for stylistic clarification, but also to resolve the potentially unwanted artifacts of the program.

Though accidental and often unwanted, these flaws are stylistic features themselves—they are what early style transfer techniques will be remembered for in years to come. Brian Eno once eruditely suggested, "Whatever you now find weird, ugly, uncomfortable and nasty about a new medium will surely become its signature. CD distortion, the jitteriness of digital video, the crap sound of 8-bit—all of these will be cherished and emulated as soon as they can be avoided. It’s the sound of failure: so much modern art is the sound of things going out of control, of a medium pushing to its limits and breaking apart."

With that having been said, let this book stand as a celebration of the digital noise innate to the techniques used in part to create it. Embrace the loss of clarity, the inability to pinpoint the precise meaning within the literary latent space of these pages. Find beauty in the logical flow of nodal erraticism. 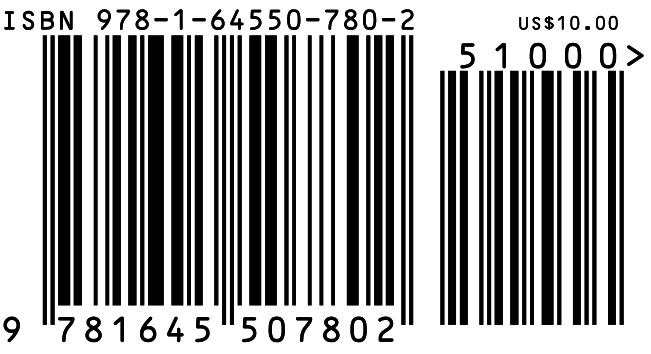